Skip to Content
Internet Explorer is an out-of-date web browser that may render some features incorrectly. Please access this site using a modern browser such as Safari 13 and higher or Chrome 80 and higher.
Home About News and media News updates Future of Sport and Recreation up for Discussion on Opening Day of Connections 2022

Future of Sport and Recreation up for Discussion

A challenge to envisage the best possible future for sport and recreation and to act now to ensure it becomes a reality was laid down to sector leaders on day one of Sport NZ’s Connections 2022 conference in Christchurch on Monday.

Over 230 delegates from sport and recreation organisations, national and regional governing bodies and sector funders were congratulated by Sport NZ Group Chief Executive Raelene Castle on their stellar work as the country grappled with COVID-19, but also warned that challenges – many of them as yet unseen – will lie ahead for the sector.

The shape of sport and recreation in another 40 years’ time was very much unknown, however factors such as climate change, funding viability and changing priorities for participants would have a significant impact, said Castle.

“Forty or 50 years ago women’s sporting options were netball and hockey.  Men’s options were rugby, football, maybe hockey, and cricket. That was it. Forty years later there are 300 options for young people.” 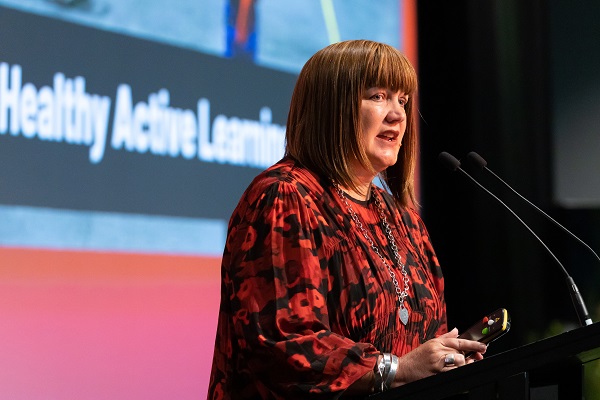 While some of the messages may have been confronting for sports organisations pondering their futures, the opportunity existed to start adapting for the future - now.

“If you look backwards then we have already faced a whole lot of change and we are still here to tell the tale.  So let’s not look at it as scary – but we do need to be thinking about it,” said Castle.

“As the world changes you have to shift to your new focus,” he said.

The biggest challenge for leaders trying to envisage the future was that human brains were “wired for the past” and people tended to get “stuck in the present”.

The danger of that was ultimately becoming “Kodak’d” – a reference to the global film giant that was wiped out by the digitisation of photography.

Delivering on the obligations of the Treaty of Waitangi was also on the agenda, with Te Rūnanga o Ngāi Tahu chief executive Arihia Bennett advising that delegates would discover the pathway to genuine bi-culturalism in their organisations by looking deeply within themselves.

“Ask yourself what your own attitude towards mana Māori is,” Bennett said.

“You need to get with the programme and build a sense of knowledge and understanding.

“We want more meaningful demonstration of our values woven into our sport. We must move with a growing diverse community and a society that wants better inclusiveness.”

A powerful, humour-laden account from David Letele, provided an uplifting finish to the day.  Letele described  his journey from an upbringing in a Mongrel Mob family and a life of crime, morbid obesity and mental health challenges to inspirational community leader and health and wellbeing advocate.

Letele’s message of how to achieve what could seem impossible was simple: “Just start”.

His background as a professional rugby league player and his university education meant Letele was “lucky” as he was able to understand and implement the steps necessary to recover his health after he ballooned to over 200kgs, however there were plenty of Kiwis in need of help who were less fortunate.

“I help people because I can,” he said. “If you can help – then you should too.”