Internet Explorer is an out-of-date web browser that may render some features incorrectly. Please access this site using a modern browser such as Safari 13 and higher or Chrome 80 and higher.
Home About News and media News updates Remembering Sir John Graham (1935 - 2017)

The funeral of a man described by Sir Graham Henry as “one of the great New Zealanders” will be held today at Auckland’s St Mary’s-in-Holy Trinity Cathedral. 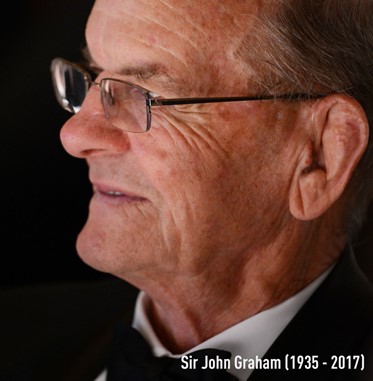 Sir John Graham died last Wednesday aged 82 following a long battle with cancer. He leaves an immense legacy through his efforts and achievements as a sportsman, educator and administrator.

Sport NZ also recognises the significant contribution Sir John made to the sport sector as a whole, and to our own organisation. In 2000 he led a comprehensive review of sport and recreation in New Zealand (the Graham Report), which led to substantial changes to the way sport is delivered, including the creation of the Sport and Recreation Commission (SPARC) – the forerunner to Sport NZ.

Born in Stratford, Taranaki, Sir John was knighted in 2011 for services to education and sport.

He played 22 tests for the All Blacks between 1958 and 1964 (three as captain), and was later President of New Zealand Rugby.

He has been one of New Zealand greatest sporting leaders – on the field of play, in the boardroom and in the classroom. We mourn his passing, but celebrate the life of a remarkable man who leaves behind such a rich legacy for the sporting community in this country.