Skip to Content
Internet Explorer is an out-of-date web browser that may render some features incorrectly. Please access this site using a modern browser such as Safari 13 and higher or Chrome 80 and higher.
Home About News and media News updates StarJam a game-changer for disabled young people 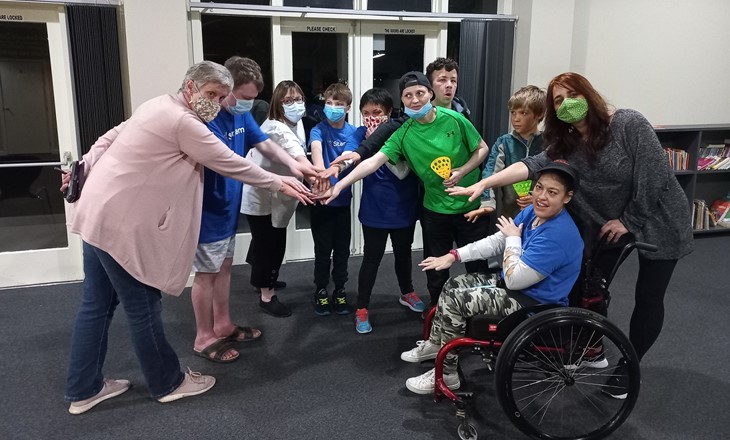 A new programme introduced to the Hawke’s Bay recently is changing the lives of a group of disabled young people and their families.

StarJam kicked off its first programme in the area earlier this year after discussions between Sports Hawke’s Bay and the disabled community identified a need for more regular and diverse opportunities.

With the help of Tū Manawa Active Aotearoa funding, the new offering is proving so successful with tutors, parents and young people alike, that Hawke’s Bay has become one of the fastest growing StarJam regions in the country.

“We run four workshops a week, with a view to running more. It’s just taken off in leaps and bounds,” says StarJam volunteer Raewyn Little.

StarJam itself is a not-for-profit New Zealand organisation that seeks to empower disabled young people through music and performance, while also connecting them with their passions, peers and wider community.

Eleven-year-old Fynn Botherway is one of those “Jammers” – his Mum Kirsty signed up straight away when she heard it was being set up in her area and says it’s been life-changing.

Fynn has a duplicated chromosome, which means he struggles with fine motor skills and movement. He’s also non-verbal. It also means, unlike his older brother, he’s not had the luxury of things like playdates, sleepovers and after school activities – until now.

“This was a really big step for us. It’s the first time that we’ve had an independent activity for him being a drop-off event, and that’s a real celebration for our kids because it just doesn’t happen often.

“Fynn is very excited about going each week, he’s made independent relationships, he has peers and friends… it’s not something that we’ve had to build for him, which is epic!”

It’s also ignited a passion for music and movement at home.

“At each session they get a minute to do their thing, be it a song or activity, and Fynn chooses the songs or movements he wants to do at home, it’s fantastic – StarJam has been a game-changer!” says Kirsty.

StarJam volunteer Raewyn has noticed big changes in Fynn too and talks about how he’s learned to communicate in other ways.

“Fynn loves to dance, and so he expresses himself through that – being an all-inclusive place where everybody’s important, he has the support and acceptance from his peers. It’s just like a family, a connection of people with the same kind of life challenges.”

“I’ve only been doing this for almost two terms and it’s the most rewarding thing I’ve ever done, absolutely, I come away with so much more than I give.”

“The aim of the Tū Manawa fund is to reduce barriers for those that are less active, so seeing the impact that the StarJam programme is already having on these young people, and the wider community, is amazing.”