Skip to Content
Internet Explorer is an out-of-date web browser that may render some features incorrectly. Please access this site using a modern browser such as Safari 13 and higher or Chrome 80 and higher.
Home About News and media News updates Top international award for Archery NZ stalwart

In a fitting endorsement, New Zealand’s Carole Hicks has been honoured by her sport at the highest level after being named the World Archery Volunteer of the Year (2015) in Las Vegas recently.

Having fallen into the sport by accident over 40 years ago, Hicks has become a prominent figure across many facets of archery for her considerable contribution at national, Oceania and international level. It is a measure of Hicks universal standing that she was one of the first to be honoured after the relatively recent introduction of global awards by archery’s governing body.

"I was completely flabbergasted,’’ she said. "It’s not often I’m lost for words but I sure as hell was this time.

In 1972, Hicks was dragged along to an archery session by a friend who was keen to try the sport. That first introduction left Hicks, a physical education teacher, with a sense of overwhelming boredom rather than any feeling of excited anticipation. However, when she gave it a proper go, Hicks was hooked, archery becoming her sport of choice and with it the start of a remarkable story of selfless dedication now spanning into its fifth decade.

Combining participation as an athlete with behind the scenes roles came naturally to Hicks, her involvement as a volunteer quickly gathering momentum where over the years she has gone on to hold most positions on offer at Archery NZ. This has led to an international judges’ presence and more recently a deep involvement with para-archery at all levels.

"It started, like most things, at the absolute grass roots. I got to be a member of the club committee and then in 1976, I became a national judge for archery. Then I was involved a bit in international archery because Australia held the world championships in Canberra in 1977, so a bunch of us from New Zealand went over to help them run that tournament.’’

When the world championships returned to Australia (Adelaide) in 1987, Hicks became an international judge and from 1993 onwards, was manager of the New Zealand team to every world championship, except 2003, when she was Chair of the International Judges’ in New York. Showing her durability, Hicks remained manager of the New Zealand team until last year.

At international tournaments, Hicks met people from all around the world, her international judge’s status leading to other opportunities including election to the Constitution Rules Committee.

A few years later, para-archery moved away from the International Paralympic Committee (IPC) range of sports after being absorbed into the World Archery Federation and is now completely independent of the IPC.

Hicks was elected onto the inaugural committee and more recently became Chairperson of the International Para Archery Committee, the rules being essentially the same as for able-bodied archers.

"Meeting people and being with people……locally, nationally, internationally, it’s a huge privilege,’’ Hicks said of the rewards that come with being a volunteer. 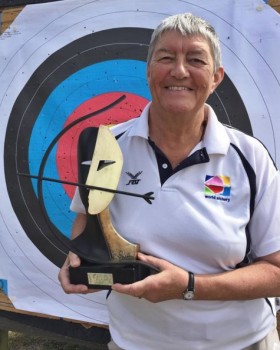