Skip to Content
Internet Explorer is an out-of-date web browser that may render some features incorrectly. Please access this site using a modern browser such as Safari 13 and higher or Chrome 80 and higher.
Home About News and media News updates Whānau day shows the power of a connected community

Whānau day shows the power of a connected community

Scooters were popular at The Active Hub Whānau Day at Richmond Primary in Napier, which offered a chance for the whole community to be active together.

It’s not every day a Royal Airforce helicopter lands on your school field. And then you get to shoot hoops alongside the local policeman, your teacher, and your mum. That’s exactly what happened for students at Richmond Primary, a small school in the heart of Maraenui Napier, when a desire for teachers to connect with whānau post-COVID turned into a community-wide celebration.

The Active Hub Whānau Day held in term 3 was the result of the small school, with a roll of 74 and average attendance of 50, recognising the power of collaborating with its community. Like many schools across the motu, the school has felt the impact of COVID and been forced to think outside of the box to overcome these challenges. Most notably student engagement and attendance.

It’s also been struggling to connect with whānau which, for teacher Karena Ngarangione-Wicks is key to supporting tamariki wellbeing. She says engaged learners start with ensuring they, and their whānau, feel safe and appreciated. “You can't really push all of this other learning on them until they have a sense of belonging and a sense of identity. It’s no point in pushing, pushing, pushing all of this academic stuff if we haven’t got those connections, haven’t built those relationships,” she says. 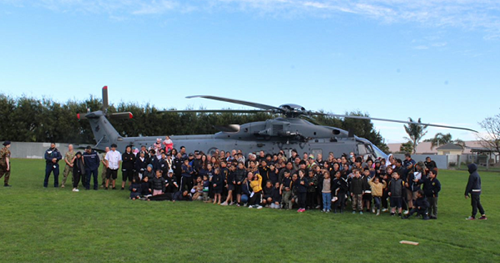 The landing of a Royal Airforce Helicopter was a highlight of the day for students, whānau and staff.

In the end, the event saw 57 students and 80 whānau members joined by representatives of over 20 community health and physical activity providers for an afternoon of being active, sharing kai and connecting. Tamariki and whānau spent the afternoon on a bouncy castle endurance race, at the play trailer, biking, playing rugby, scooter, and basketball as they also got to know police officers, army people, and firefighters kanohi ki te kanohi. There was also a kai element, with Ka Ora Ka Ako providing food and try-at-home recipe bags for butter chicken (including vege’s from the school’s garden).

The success of the day can largely be attributed to community collaboration supported by the Hawkes Bay Health and Wellbeing Partnership Group – the regional advisory group responsible for guiding and coordinating health and wellbeing initiatives across the Hawkes Bay. Primarily Ka Ora, Ka Ako (healthy school lunches), and Healthy Active Learning - the joint-government initiative supporting schools to create healthy and active learning environments and better connections to their local communities. Led regionally by Sport Hawkes Bay, Richmond Primary is one of 40 schools in the Hawkes Bay benefiting from Healthy Active Learning.

Identifying the need to awhi whānau, and connect them with wellbeing providers in the community if they wanted, the school pitched its idea for an Active Hub Afternoon to the school’s Sport Hawkes Bay Healthy Active Learning Advisor Sally McKenzie. Sally took the idea back to the steering group and, thanks to the connections within that group and wider community, next thing they knew the New Zealand Defence Force had agreed to fly in a helicopter to kick-start the day. A unanimous highlight for all, including the two girls of Mum Christina Nopera-Ruru.

“My babies came home talking about the whole day especially the army people and the wakatopatopa,” she says. A proud past-student herself, Christine says the day was awesome and she hopes it will happen again. 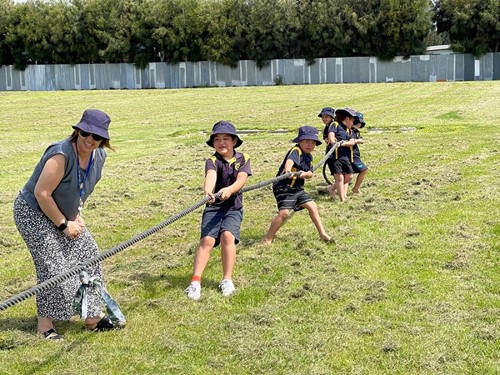 For those there, the mantra of the day became “you can’t be what you can’t see” – an opportunity for tamariki to be exposed to pathways they might not have considered.

“For these young tamariki to see their role models being active and then to have their whānau there being active with them was just absolutely gold,” Sally says.

“If we can do things that tap into more of that wellbeing, whānau, collective space then that’s going to be key,” she says, adding that it had also inspired discussions about similar events in other schools.

Constable Duane Coffin agrees that the day set a precedent for working collaboratively as a community. For him and his team, the chance to connect with whānau and tamariki in a positive environment provided a rare opportunity which he hopes to have more of.

“It empowered all of us, and the families, tamariki and especially staff who work in a challenging school. It’s not often that they get wins on the board,” he says.

Karena is excited reflecting on the opportunity the event presented to meet and collaborate with other people in the community passionate about enhancing the wellbeing of their tamariki.“It was really nice to meet all of these different wonderful people that had strengths within the community and hear what they do and then work together to come up with all these ideas.”

Most significantly though, she says the day has allowed her to build new, lasting, relationships with whānau.

“I now have four of my whānau on easy speed dial. It’s cool. It really helped me to connect.”