Skip to Content
Internet Explorer is an out-of-date web browser that may render some features incorrectly. Please access this site using a modern browser such as Safari 13 and higher or Chrome 80 and higher.
Home Resources Play streets in Napier 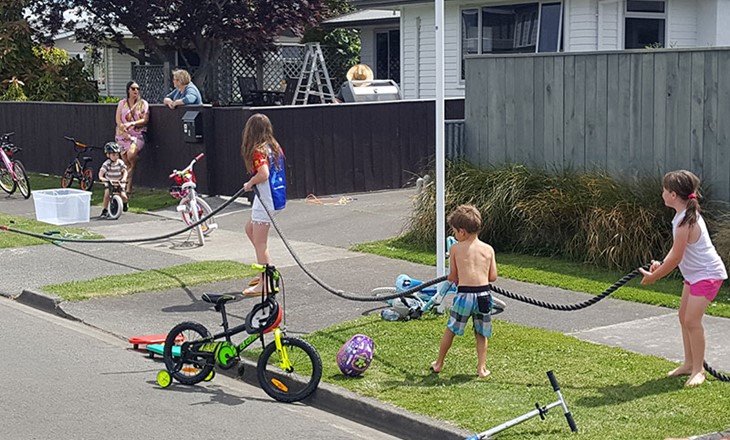 A quiet Napier cul-de-sac was closed in November to all traffic and became a Play Street where children and their parents could come together safely, be active and have fun.

Play Streets are short, resident-led road closures on quiet, low-risk streets and allow neighbourhoods to play safety and freely outside their own front doors. The initiative aims to make the process for closing the street for this type of event simpler than for closing a high-volume, high- risk street for a large-scale event.

Sport Hawke’s Bay Places and Space and Play Lead Tina Haslett says the Play Street event was well-received by both tamariki and their parents.

“The biggest thing for me is that we created memorable experiences for all the children. I think it was a day they were so looking forward to and one that they will look back on and connect with a fun time spent with their friends and parents.”

“Play Streets are about more than play, they’re about community - everyone benefits.”

Sport Hawke’s Bay and Napier City Council representatives were both on the call when Sport NZ and Waka Kotahi outlined the pilot and asked for interest. They decided to work together to bring the initiative to Napier as a community-led project.

Putting a call-out over Facebook, they asked for local interest. Receiving a positive response, a meeting was held and Grant Place in Greenmeadows was selected for the pilot as it was a quiet street with numerous families living on it.

Stephanie Kennard, Planning Projects Facilitator at Napier City Council says the Council was “privileged to be accepted as a pilot city for the Waka Kotahi Play Streets pilot”.

“Working alongside Sport Hawke’s Bay, and local resident Sheree Greig, the Play Street within Grant Place was a perfect example of a community-led event, which resulted in tamariki being able to play in their own street without any risk to their safety,” she says.

The Play Streets team worked with Grant Place street champion, Sheree Greig, and the Council’s traffic management department to go through the proposed revised street closure process, complete the application form and have it signed off.

The Play Streets pilot involves a new process for street closures, which are not as comprehensive as those for major road closures for significant events, and would be led by residents of chosen streets.

Tina says this new application raised some interesting challenges for the traffic management team, particularly as it would be the residents themselves closing the street. This meant a relaxation of some existing standards and processes.

“People involved in traffic management really understand and manage risk, so it was important to have them on board and at ease. We really appreciated their role, concerns and support to make this day happen.”

One factor that helped was connecting the Napier Council traffic management team with their counterparts at Hutt City Council. Hutt Council has run several Play Street events as part of the Play in the Hutt project (could link to this case study).

“When the two traffic teams connected they spoke the same language, and it was reassuring for the Napier City Council team to hear how Play Streets could work and how beneficial they are for connecting neighbourhoods.”

On the day of the event, residents’ closed Grant Place with cones and barriers and a traffic management representative checked the set-up.

Another factor helping with the event’s success was a four-week notification period with residents. This involved an initial letter-box drop followed by the Play Street team door knocking at all homes to answer any questions and gain consent – 95 percent of residents supported the event.

Two weeks out from the big day, there was a reminder leaflet drop and on the week of the event an invitation to “come out and play” was distributed. The invitation asked children to bring toys and games to share with neighbours, and it reminded parents that they were responsible for their children at the event.

On November 1 2020, Grant Place became a safe area for more than 25 children to play in and for their parents to join with them as well as take a moment to sit, catch up with neighbours and enjoy a bbq.

The event ran for three hours and in that time the children entertained themselves with simple, in-expensive play equipment, including tug-of-war, skipping, ball sports and lots of water play.

“The kids were free to choose what they wanted to play with – it was easy and spontaneous. They really buzzed in an environment where adults were present but not directing them.”

Grant Place Street Champion Sheree Greig says it is a close neighbourhood with quite a few children and she thought the Play Street initiative was well suited to them.

“It was a fantastic afternoon with both children and adults being able to play freely and safely out on the street. The whole process was easy and I had great support from both the Napier City Council and Sport Hawke’s Bay. Play Streets is such a great initiative and I hope to hold them on a regular basis.”

Since the event, Sport Hawke’s Bay has been in discussions with the region’s two other Councils, and both have expressed interest in running Play Street events.

“These types of projects are fantastic for Councils to be involved in. If they have the tools, templates and resources they can work with their communities who then drive the projects,” says Tina.

“There are so many benefits of play. Of course there’s the physical benefit but I believe play is the most important learning mechanism that we have as human beings. Nothing else gives you the quite the same license to explore, have fun, be curious, creative and just be yourself”

“It’s just so important to keep advocating for things that make it easy for parents to create safe play environments, encourage neighbours to connect and get to know each other.”