Skip to Content
Internet Explorer is an out-of-date web browser that may render some features incorrectly. Please access this site using a modern browser such as Safari 13 and higher or Chrome 80 and higher.
Home Resources Regional active recreation advisors (RARA) pilot project

Active recreation for rangatahi is a key focus of the Sport NZ Strategic Plan 2020-2024 as we aspire to reduce the drop off in physical activity levels in this age group.

Active recreation provides a platform of diverse activities which can be adapted to meet the needs of young people and get them moving in a way which feels right for them.

New to this space, Sport NZ set up a 12-month pilot project to investigate the impact a dedicated active recreation advisor would have in a Regional Sports Trust and the quality of active recreation opportunities and experiences for rangatahi.

Following an RFP process, Sport Tasman and Sport Hawke’s Bay were selected to be a part of this pilot project. Their projects were very different in target, both demographically and geographically.

The Hawke’s Bay pilot didn’t focus on one specific group of rangatahi, rather Jackson’s role as a RARA for Hastings allowed him to act as a community connector, facilitator and/or link to Tū Manawa funding, depending on the specific needs of the groups he was working with. Over the course of the year, Jackson worked alongside 12 different providers, schools, kura and community groups to establish new connections, increase awareness and facilitate meaningful experiences for rangatahi through active recreation.

One of the key providers Jackson engaged with, was assisting Te Aratika Academy in shaping kaupapa that focused on enhancing the mana of the rangatahi and improving their matauranga/knowledge regarding significant Māori sites. Within this kaupapa, Te Aratika Academy were successful in securing Tū Manawa funding for a Pourerere based camp. Rangatahi explored this environment through snorkelling and freediving which enabled them to connect with Tangaroa and learn lifelong skills of gathering kaimoana. Insights from this camp have helped shape the development of a second camp, which successfully received further Tū Manawa funding.

Sport Tasman’s approach was to work with the same two groups of rangatahi over the course of the pilot project, building relationships within the groups and increasing their awareness of what opportunities for active recreation they can access.

Through co-design principles, it became apparent that the migrant and refugee rangatahi in Nelson had a strong desire to integrate and connect with other rangatahi, as well as learn about Māori culture. As a result, the Nelson group expanded to include rangatahi from both Tuia Te Matangi and Whakatu Marae Whanau Ora. Stand up paddle boarding (SUP) was identified by the rangatahi as an activity that they wanted to try. For many it was the first time they had connected with the moana in this way and some rangatahi had never touched the open water before. 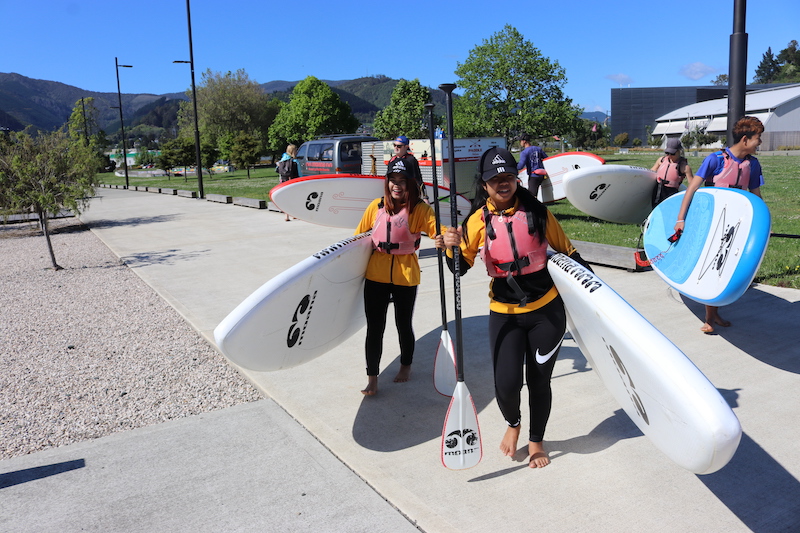 The Buller rangatahi had identified gaining a pride in where they come from and a greater knowledge of Māori culture as two significant areas that they would like to RARA project to focus on. These insights were used to develop a series of fun outdoor adventures with local providers, including a black water caving adventure, overnight rafting experience and three-day wilderness canoeing trip. The trips were accompanied by a cultural advisor, to help increase rangatahi knowledge of local tikanga and Māori legends.

“This is more than just getting young people active; it is a vehicle for creating better hauora for young people. RARA is helping to better connect communities and allowing youth to have a better sense of belonging.” Ryan Edwards, RARA Nelson - Sport Tasman.